Check out RTA's latest guitar clinic videos from Music Moscow 2008. Big thanks to www.guitarworld.ru and Krank amplifiers.
You can check out official video at bands youtube http://www.youtube.com/user/ReignTheAbsolute

Hi all,
I'm here to pimp my new design/video studio, The Reinvented Wheel. Services I offer include:

>Video - concert or in-studio filming
>DVD production - menu design and authoring.
>Band logos
>Graphics for all types of band needs, including posters, cover art, T-shirt design, etc.
>Photo retouching
Here is a portfolio containing examples of my work: Here are some examples of video I've shot and edited, including some DVD title graphics. My rates are quite reasonable and I'm willing to negotiate.
Please contact me if you have a project and need an estimate.

On Saturday, Jan 27, long time anti-metal crusader Bob Larson will be hosting an "Extreme Warfare Youth Seminar" at the Marriott Northwest in Atlanta, GA. The topic is "Confronting demonic music, movies and video games." The seminar is free and open to the public, and is scheduled to run from 10 am to noon.

This is, I think, an excellent opportunity to confront the lyin' in its den, and spread a little infoterror in the process. To that end, I would like to see if a small cadre (perhaps 5-7) of CORRUPTed souls would be willing to join me in crashing the seminar, distributing flyers and (probably) cd-r's (perhaps copies of "Dissident" and an extreme metal comp of some sort?).

For those who are interested, pm me or email me at laeth.maclaurie@gmail.com

An invitation-only gathering of the most unspeakable beasts in creation. Also, delicious burritos. Special appearances by Enders Game and SassParilla The Singing Gorilla. Who will survive? Who?

Our next single will be out in, let's say, a month. Expect it to be called "Seven."

The first single -"Robot Affliction" from our upcoming self-titled debut from Deprofundus Productions is up on our myspace. 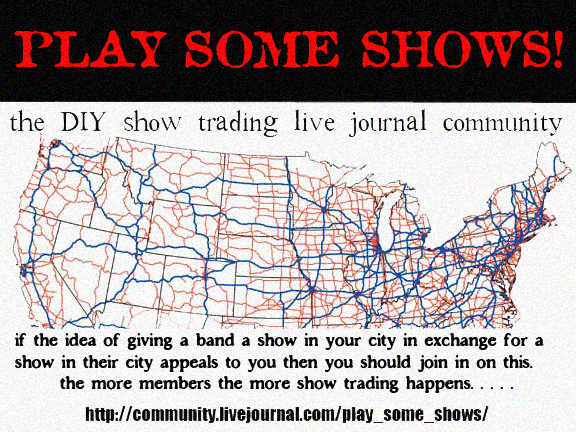 Just thought this might be of interest for people in bands and such.
If things of this nature are not allowed I totally understand and will remove it, or the mod. can delete it.

INTEGRITY
DEATH BEFORE DISHONOR
AMERICAN WEREWOLVES
CRIMESCENE
OF LEGEND
$10
I have advance tickets
Neuronomicon is looking for a keyboardist between the ages of 20-25. We have four songs being worked on right now, and we are recording a brief demo CD in September, at Reeltime Studios in Savannah, GA.

We are looking for a keyboardist of any skill level, to play the songs that have currently been written, as well as assist in the scoring of other songs. Our main concern is for someone capable of playing live. After recording the demo/EP, we are planning on playing out in support of it.

I am currently having to double my work load by playing keyboard, guitar, and bass, as the lineup consists of a vocalist, and two guitarists as of right now.

Influences include, but are not limited to: In Flames, Children of Bodom, At the Gates, KMFDM, Rammstein, White Zombie, Slayer, Dream Theater, VAST, NIN, The Prodigy, VNV Nation, Wumpscut, Front 242, Soilwork.

I am more than willing to show you any of the leads and arpeggios that have currently been written. Just get in touch with me via telephone, and leave a message if I am unavailable.